These pictures were taken on a cruise to Alaska by Robert & Judy from Oklahoma City.  They agreed to let us share the photos with our readers.  We don't have their comments, but it seems as if they enjoyed the roundtrip cruise from Seattle.  We know they visited, Skagway, Juneau, Ketchikan, Victoria BC, and spent a day cruising the Glacier Bay National Park.
Our thanks to Judy, Robert, Marye, and Charles! 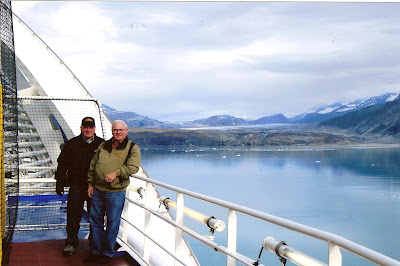 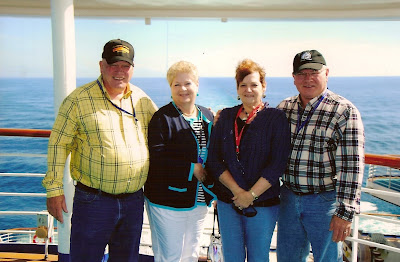 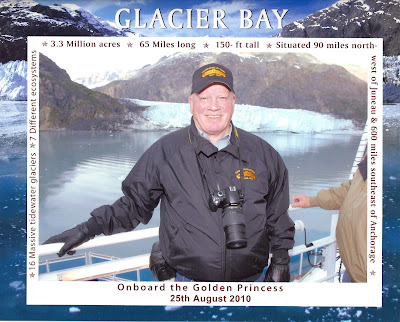 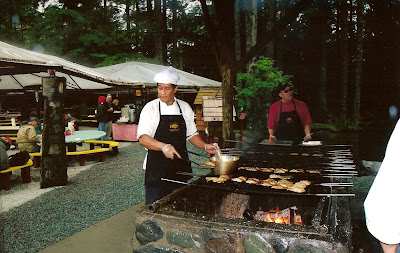 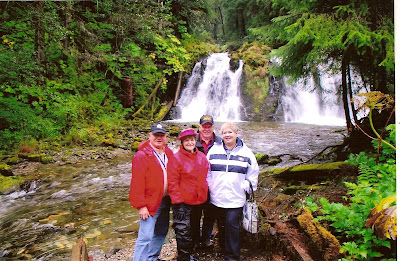 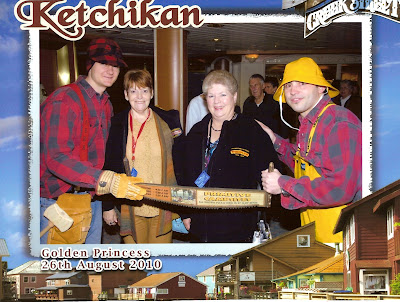 We did a one week family vacation of 14 people on the Caribbean Princess. We flew overnight to JFK and took a cab to the ship in Brooklyn. We had directions from the internet and we and the cab driver still could not find the cruise terminal due to a lack of street signs in Brooklyn. Our family members were staying a the Marriott in Times Square. The bellman at the entrance went through several cabs before finding cabs that knew how to get them to the Princess Terminal.

We boarded the ship with over 3500 of our newest friends. The ship was completely full. We were assigned "Any Time Dining" which we could not correct before getting on the ship. So, we had to stand in line for one hour to fix that. The Maître d reluctantly gave us two tables in the non fixed seating room. The ship was just packed.

This ship goes to five ports and your first sea day is the last day of the cruise. Our first port, Newport, Rhode Island was a tender port. It rained really bad. It was especially delightful standing in a slow moving two block tender line in a driving rainstorm to get back on the ship. We got soaked!! The captain could have had the courtesy to run more tenders.

Boston, the next port brought more rain. The shuttle was $16 round trip (must be the new shuttle rate) for a short drive into town. We took public transport and cabs. Did the Freedom Walk which was very interesting.

Our next port Bar Harbor, Maine gave us sunshine. The town was elbow to elbow people with 3500+ passengers in town. Nice place though.

St. Johns, New Brunswick was next. Nice weather again. Took a 5 hour cab tour. Got to see the tide action in the Bay of Fundy. Watched a river go backwards up stream with rapids etc.

Halifax, Nova Scotia our last port had dense fog could not see anything. We walked around town and the fog turned to heavy rain. Got soaked again.

I think that Princess is lowering their standards and Carnival Corp is fitting them in just above Carnival Cruise line ships and below Holland America. It is too bad for they were once a great cruise line. The food was not up to the old Princess standards nor was the service. The crew did not seem happy. We talked to some crew members we knew from the past. The crew was generally not pleased with the ship. It was a mob scene every place you went. Slow elevators, elbow to elbow people, etc.

That ship is just too damned big and Princess is buying two more that are bigger!!!!
Posted by Garry at 09:40

Starting Your Cruise in San Juan

Considering a cruise of the Eastern or Southern Caribbean? Consider starting from San Juan, Puerto Rico. Celebrity Cruises, Cunard Line, Holland American Line, Princess Cruises, Royal Caribbean and more sail from the Port of San Juan. Because San Juan is closer to the islands of the Caribbean than ports in the southern U.S., you should be able to spend a greater portion of your cruise enjoying destinations such as the ABC Islands (Aruba, Bonaire and Curacao), the Virgin Islands and the Turks and Caicos islands.

The cruise ship docks are within walking distance to the heart of Old San Juan, which dates back to the 16th century. The walled old city is beautifully preserved, with cobblestone streets, historic forts, and distinctive galleries and shops. Ponce de Leon, the first governor of the island, is buried in the Cathedral of San Juan.

There’s much more to see and do outside the walls of the old city – so much that you may wish to arrive a few days before your ship departs or stay a few days after it returns. While there is plenty of Americana (think chain restaurants) in and around San Juan, the culture also reflects the traditions of the indigenous Taino people, along with European and African influences. A good place to start is either the Museo de Arte or the Museo de Arte Conptemporaneo, which exhibit works by the artists of Puerto Rico.

If you’re more inclined toward fresh air pursuits, visit El Yunque, the only rainforest designated as a U.S. National Forest. There are marked walking trails, lined with ferns and flowers, some of which lead to lovely waterfalls.

If you’re feeling lucky, many of the large hotels in town have glittering casinos. Or, visit the home of one of Puerto Rico’s signature products – The Bacardi Rum Factory. A ferry will take you across the bay to Catano, where you’ll find the distillery set in gorgeously landscaped grounds. You can take a tour or simply enjoy some Bacardi-inspired drinks in an open-air pavilion.
San Juan also offers golf, beaches, terrific dining and plenty of other diversions for visitors. To select a cruise that will allow you to spend some time in San Juan, talk with your personal cruise expert.
Posted by Garry at 10:05