Cruise Review: Allure of the Seas

This year, we had our annual Cruise Holidays convention aboard the Allure of the Seas, sailing to the Eastern Caribbean from Ft Lauderdale.  Prior to the start of the cruise, we spent two days in training at the Renaissance Hotel in Plantation, Florida.


The hotel is about 10 miles west of the airport in Ft Lauderdale. Since the hotel didn’t offer a shuttle, we took a taxi from the airport.  The taxi charge (including tip) for the one way trip was $45. The hotel rooms were nice and the restaurant/bar was what you would expect from a Marriott property.  However, there is no other restaurant or lounge within easy walking from the hotel.  Personally, I prefer more dining choices than I found in the area – or the hotel.
Staying at the hotel over the weekend were several girl softball teams, in town for a tournament…  On Friday night, the girls next door to our room had a party that continued until after midnight.  I guess that team must have lost their game on Saturday because the room was quiet that night.


In our previous visits to Ft Lauderdale, we have stayed closer to downtown and the pier.  On our next visit to the area, we plan to return to our favorite area hotel, the Embassy Suites on 17th street.
At noon on Sunday, our group left the Plantation Renaissance Hotel for the ship.  When we entered the pier, we could see the Allure of the Seas and several other cruise ships in the harbor. The Allure was much bigger than any of the other ships – much bigger.  Too big… 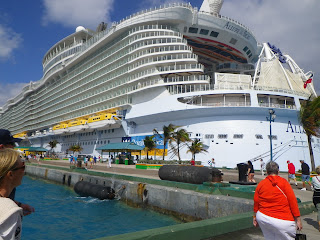 I was amazed at the easy, and quick, embarkation.  Even the security screening was painless.  With 5400 passengers on board, this is NOT what I had expected.  For the embarkation process, I will give Royal Caribbean and the staff at the pier an A+ grade.  Maybe we were lucky, but it was easy to get on board the ship.
The ship has an ice ring, platform diving exhibitions, a zip line, two FlowRiders, and the musical, Chicago! Lots of things to see and do on sea days.  The ship has a sports car parked on the Royal Promenade near the shopping area and a working carousel on the boardwalk.


We had a balcony cabin on the starboard side of the ship, facing the ocean.   I know that sounds weird, but many of the balcony cabins on the Allure face into open air areas of the ship: Boardwalk and Park Place.
For the first time that I can remember, we had enough 110 volt plugs in the cabin for all my stuff!  In the past, we have always carried a small extension cord with multiple outlets.  This time, I didn’t take the extension cord out of our bag. 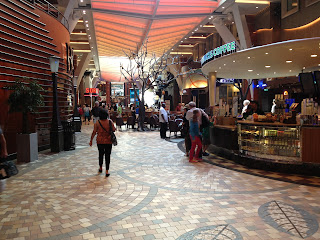 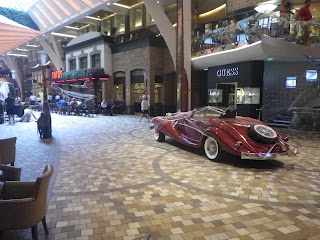 On the cruise, we had 3 sea days and 3 days in port. This was our first visit to Nassau, Bahamas.  While in port, Anita had an opportunity to tour the Disney Dream that was docked next to us.  It was her first time on a Disney ship and she was impressed with the ship.  Meanwhile, I toured downtown Nassau.  I wanted to visit the Straw Market.  However, I was very disappointed in the Straw Market and downtown Nassau. I returned to the ship without any purchases – not even a magnet.
The other two ports we visited were St Thomas and St Maarten.   We have been to both ports several times and looked forward to quiet time in these ports.  On St Maarten, we did take a 3rd party tour to the beach.  The beach was great, but the tour left a lot to be desired.  After we get a response from the tour vendor, I plan to write about the experience.  Sure glad it happened to me and not to one of our customers.

To be continued (more about the Allure of the Seas).
Posted by Garry at 17:43