In the cruise industry, New Zealand and Australia are usually referred to as a single cruise destination. However, don’t make the mistake of thinking that these countries are similar. While the two are geographically separated only by a stretch of the Tasman Sea, they are incredibly different. Australia’s generally flatter terrain contrasts with New Zealand’s towering mountains and steep fjords. Australia has hundreds of animal species that exist nowhere else in the world, while New Zealand has rare geysers. And, the population of the city of Sydney, Australia, outnumbers the entire population of New Zealand.

New Zealand is formed of two islands, North Island and South Island, and most cruise itineraries include port calls on each. On North Island, Auckland is a common starting or ending port for cruises. This city has a spectacular waterfront where you can catch a ferry to Waiheke Island, known for its growing winemaking industry. For an expansive view of Auckland, visit the 1,028-foot-high Sky Tower, or hike to the top of one of the dozens of volcanic hills scattered around the city. Auckland is also the starting point for side trips to the country’s thermal features.

Wellington, New Zealand’s capital, is at the southern tip of North Island. A stroll along the lovely waterfront reveals some surprises, including large-scale sculptures. Te Papa, the national museum of New Zealand, offers a fascinating look at the country’s culture. Take the Wellington Cable Car up to the hills that overlook the city, or take a shore excursion over the Rimutaka Range to the Wairarapa wine region.

On the South Island, Dunedin is like a bit of Scotland relocated to the South Pacific. If you explore the streets that branch out from the Octagon, the city’s central square, you’ll find restaurants, cafes, and shops where you can purchase local artworks or an authentic Scottish kilt. Shore excursions are available that will take you to view colonies of penguins, albatrosses and sea lions.

Christchurch is the largest city on South Island, and its architecture, lush gardens and red phone booths give it a decidedly English flair. This is another city that’s easy to explore on foot, with many art galleries, artisan workshops and museums.

As a southern hemisphere destination, New Zealand is a fabulous winter or early spring cruise getaway for North Americans. Talk with your personal cruise expert about all of your options for cruising New Zealand.
Posted by Garry at 10:01

Video recoded on the Today Show with Matt Lauer
Best Cruise Ships by Conde Naste
Posted by Garry at 10:43

The summer family vacation is a great tradition, and what better way to enjoy time with your family than to cruise together? Cruises bring a wonderful convenience and ease to your summer vacation. You only have to pack and unpack once, while the ship and crew do all the work of getting your family from one delightful port call to another. Delicious food, cooked and served by professionals, is available 24 hours a day, and entertainment to please every family member is right there on the ship.

The Caribbean is one of the world’s most popular cruise destinations all year long. During the summer, the islands are at their peak of lush beauty, and warmth of the sun is balanced by cooling ocean breezes. This is a perfect destination for families that love spending time on the beach or playing in the water.

Alaska is a cruise destination that’s available only during the summertime. Families that like a touch of adventure in their vacations will delight in the glaciers, fjords, whales and other wildlife of the Alaskan coast. Alaska is also a perfect destination for a “cruisetour” – a vacation that combines a cruise with a land-based tour, such as a visit to magnificent Denali National Park.

Another cruise destination that is limited to the warmer months is New England and southeast Canada. Until recently, these cruises were mainly available in the fall, when leaf colors peak. However, this area offers spectacular scenery and fascinating history even when the leaves are green, and summer cruises are becoming more numerous. On cruise departing from Boston or New York, you might visit Bar Harbor, Maine; Halifax, Nova Scotia; and Charlottetown, Prince Edward Island.

If you family is ready to journey farther from home, summer is a wonderful time to explore Europe by cruising the Mediterranean. Many different itineraries link the sunny cities along the Mediterranean coast, including Barcelona, Nice, Genoa, Rome, Naples, Venice, Dubrovnik and Athens. Some ships call on the islands of Malta, Sicily or Majorca, or even on North African cities like Algiers.
Posted by Garry at 10:35

With at least nine major new cruise ships sailing in 2011, the cruise experts at Cruise Holidays recently voted on which ships are most highly anticipated by cruise travelers. Their top pick: the Disney Dream, which launched on January 26.

The Dream is the third ship in Disney Cruise Lines’ fleet and the first introduced by the cruise line in more than 10 years. The ship accommodates 4,000 passengers in 1,250 staterooms on 14 decks.

Like the Disney Magic and the Disney Wonder, the Dream is designed with families in mind. Staterooms feature under-bed storage, convertible sofas, pull-down beds, and split bathrooms (sink and shower in one compartment, toilet in another). Inside cabins have a “Magical Porthole” that displays real-time LED projections fed by on-deck cameras: an innovative way to have an outside view without an actual window.

The Dream also has magically-themed restaurants. In the Enchanted Garden, the setting gradually transforms from day to night; in the Animator’s Palate, LED screens feature Disney characters for real-time interaction with their fans.

There are Youth Clubs and activity centers for kids, tweens and teens; pools that cater specifically to kids, families and adults; and an elegant adults-only restaurant where parents can enjoy time together.

The new ship’s most spectacular feature may be the AquaDuck, the first watercoaster at sea. Guests are propelled through an acrylic tube on a thrilling journey up, down, around and even off the side of the ship before a breathtaking drop into a lazy river.

As terrific as the Dream is, there are other exciting ships set to debut in 2011. Celebrity Cruises’ Silhouette placed second on Cruise Holiday’s list of most anticipated ships. This 2,886-passenger ship, set to launch July 23, will have the same sophisticated style as Celebrity’s other Solstice Class ships. In third place, Oceania Cruises’ Marina is a mid-size ship that can accommodate 1,258 passengers. Launched January 22, the ship features spacious staterooms, lavish bathrooms and gourmet restaurants.

To find out more about how and where you can sail on one of these new ships, talk with your personal cruise expert.
Posted by Garry at 10:33

All packed, ready to go -- but we can’t get there from here

On Friday, our friends sail away from San Juan on the Celebrity Millennium for a 10 day cruise of the Southern Caribbean. Unfortunately, we will not be aboard to enjoy the sail away. If fact, we will not be in our cabin to repack our bags on the last sea day. Due to bad weather, we missed our cruise! 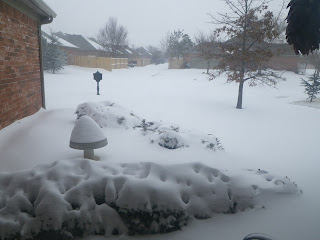 What could go wrong? We planned to leave TWO days early, expecting to enjoy the beach at our hotel in San Juan before we left for the pier. There was no way that we expected ANY delay would cause us to miss this cruise. Well, we were wrong.
What happened? On Monday, prior to our Wednesday morning departure, we suffered a blizzard. Not sure if I have had that experience before, but once is enough. We had “thunder snow” along a sustained 50 MPH wind. Anyway, the airport closed on Monday evening and didn’t reopen until after noon on Wednesday. Since our 10:30AM flight was cancelled, the airline attempted to rebook us on a later flight. However, the best they could offer was a Friday morning flight. With a change of planes in Dallas and Miami, we would reach San Juan just in time to watch our ship sail away…
Our Denver based friends are enjoying the beach and looking forward to a pleasant cruise. Meanwhile, we are still shoveling snow. 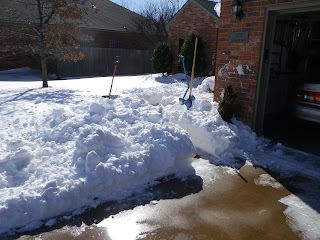 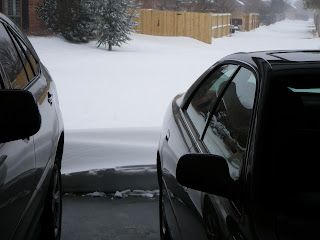 Fortunately, we did have travel insurance. Now, we wait to see how the insurance company responds to the claim. Since we were within 48 hours of sailing, we forfeited 100% of the cruise fare. In all our travels, this will be our second insurance claim. The first was when Anita had a “shopping accident” in London. Bottom line: when you travel, buy travel insurance. “You never need it – until you need it!” 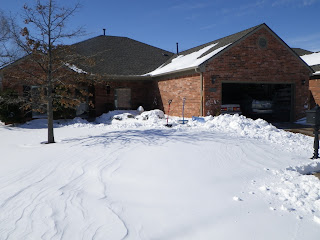 We copied this interesting article to our facebook page, ATtheTA>  It tells you of the impact of the storm to the nation's flight schedule:
travel.usatoday.com/flights/story/2011/02/Flight-logjam-could-take-days-to-unscramble/43218238/1?csp=Travel
Posted by Garry at 18:48